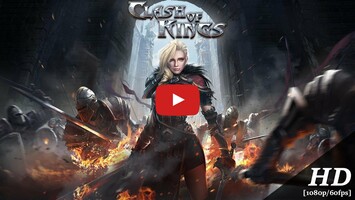 Advertisement
Clash of Kings is a real-time strategy game where you can build your own city, recruit and train an army, and conquer all the nearby (and not so nearby) land to expand your empire.

In Clash of Kings, the most important concept is that of the capital: the place where your empire begins. In it, you can find lots of different structures like barracks, libraries, stables, farms, and mines. Each of these fulfills a specific objective that lets you advance in one way or another.

The barracks, for example, have a very direct purpose: they let you recruit soldiers. Libraries, on the other hand, can provide longer-term benefits, like developing new technologies for your weaponry so you can fight your enemies with an advantage.

Once you secure your city's defenses and have a good army, you can launch an attack on the general map. From this Clash of Kings map, you can decide who or what to attack. Other player's capitals will be tough targets, but wandering monsters probably not so much.

Clash of Kings is a real-time strategy game and while it doesn't offer anything new on the genre, it's still a polished experience expressly designed for smartphones.
Reviewed by Andrés López Translated by Taryn
Advertisement

Why is this app published on Uptodown?
(More information)

Cannot able to update it's any errors occurred..

Why doesn't my chat switch to the old version?

Very useful in updating application without any stress

Can u updated the latest version with new updates..it sending me on gplay for updates

Similar to Clash of Kings

Car Parking Multiplayer
Drive around an extensive map for a realistic parking experience
Clash of Clans
Crush enemies and lead your clan to glory
Mobile Legends
An excellent, but shameless, League of Legends clone
Scary Teacher 3D
Escape the terrifying teacher!
Bus Simulator Indonesia
Drive a bus through Indonesia with this simulator
Clash Royale
Clash of Clans characters face off in epic duels
Vegas Crime Simulator
Try not to get caught breaking the law!
Clash Mini
Play with tiny Clash of Clans characters

Breakfast Cooking Mania
Cook and serve the first meal of the day
Wedding Salon 2
My Teacher Classroom Play
Alien Creeps TD
Fight against aliens and save Earth
Blockscapes
My Golf 3D
Play golf and minigolf on your smartphone or tablet!
Tsum Tsum Stadium
Combine characters and beat your rivals
Pocoyo Colors Fun
Color these illustrations of Pocoyó and his friends